Welcome, Extempore traveller. If you don’t have a favourite text editor or don’t usually build things from source (or don’t know what those things even mean) then these instructions will get you up & running asap.

This quickstart guide is based on VSCode. If you’d prefer to use another editor (e.g. Emacs, Atom, ST, Vim) then that’s fine as well—these boxes will explain how your setup process will be different.

With everything on this page, if you run in to problems make sure you check the Troubleshooting section at the end.

Here’s the stuff you only need to do once.

VSCode (a.k.a. Visual Studio Code) is freely available on all the operating systems that Extempore runs on (macOS, Windows & Linux). To install VSCode, go to the homepage and hit the big “Download” button (you can’t miss it).

Once you’ve installed VSCode, you need to install the VSCode Extempore extension—this tells VSCode how to deal with Extempore code. The main way to do things in VSCode is through the “command palette”, which you can open up with ctrl+shift+P (or through the menu View > Command Palette...). Type in a few characters of the command Extensions: Install Extensions until it shows up, then hit return. Then, search for “Extempore” and install the extension.

If you’re on Windows or macOS then VSCode has an Extempore: Download binary command which will download & set up Extempore for you (again, access it through the command palette with ctrl+shift+P). It’s about a 300MB download, so it might take a while, but when it’s done you’re good to go.

If you want to download the binary yourself it’s also not tricky, just get the latest version from the GitHub releases page, unzip it and put it wherever you like (e.g. in your Documents folder). It’s also a good idea to set the Extempore: Sharedir VSCode config setting to point to the place where you put your Extempore folder—this will allow VSCode to easily start Extempore for you (as we’ll see in the next step).

Here’s the stuff you need to do every time you want to work with Extempore.

You can start Extempore using the Extempore: Start command. It’ll open up a terminal (VSCode has a built-in terminal which you can bring up with CTRL+`), cd into your extempore folder, and start the Extempore running. If you see something like this, everything’s working—nice one.

If you can’t (or don’t want to) start Extempore using the Extempore: Start VSCode command, then open a terminal in your Extempore directory and type ./extempore (or .\extempore.exe if you’re on Windows—note the backslash instead of the forward slash) and hit return. Extempore supports a bunch of command line options—try ./extempore --help/.\extempore.exe --help to see the full list.

Extempore is now just sitting waiting for you to tell it what code to execute. Before you can do this, you first need to connect your text editor to the running Extempore session. In VSCode, you do this with the Extempore Connect command.

If everything’s gone to plan, you’ll see one more message at the very bottom of the terminal:

Congrats, you’re connected… and almost there.

Remember, if you’re not using VSCode, all the concepts are the same, but the names of the commands or the keyboard shortcuts might be different—I’m sure you’ll manage 😉, and you can find the specific details for your editor in the editor support guide.

To evaluate some code, move your cursor into a particular bit of code and hit ctrl+return. The code should flash orange, and you should see/hear the results (assuming that the code actually made some noise or printed the result somewhere).

As a quick test, try and evaluate something like:

If you can see "Hello, World!" at the bottom of the terminal, then you’ve just evaluated your first Extempore code! 🙌 🎉 🥳 🙌

One “gotcha” if you’re new to this sort of thing is the difference between the return value of a function and any side effects that it triggers. In the above example, the “Hello, World!” which you saw in the terminal is a side effect (making a sound through the speakers would be a side effect as well). The actual return value of the println function is the value “true” (which is represented as #t in Extempore).

This is just a quickstart, so we won’t go down the rabbit hole, but the rule of thumb is that when you call a print function (e.g. println)

Since Extempore has multimedia programming as a core part of its DNA, here’s “Hello, Sine!”

If you want to turn it off, just re-define the dsp function to return “silence”:

In the code above we’ve used 0.0, but any constant value will work (because physics).

If you’re more interested in playing “notes” than doing lower-level DSP stuff, then there’s an Extempore library which is designed to get you up and running quickly with a couple of synths & samplers.

Feel free to play around with (and re-evaluate) some of the parameters in that ascending-scale and try and figure out how it all fits together, and when you want to go further check out the pattern language guide.

These simple code examples gloss over some subtleties of what’s going on. But hey, if you’ve managed to get started quickly(ish), then this Quickstart page has done its job. To understand the subtleties, well, that’s what the rest of the documentation is for 😊

When you’re chewing on life’s gristle
Don’t grumble, give a whistle
And this’ll help things turn out for the best

No sound? Check your audio device

Most of the time Extempore will guess the correct audio device, but not always. So if you’re not getting any sound, it could be because Extempore is sending sound output to the wrong audio device.

To print the list of audio devices that Extempore can “see”, open a terminal and type the command ./extempore --print-devices (or ./extempore.exe --print-devices if you’re on Windows) and hit return. On my machine right now it says this, but yours will (almost certainly) be different.

The order of your audio devices can change at any time, especially when you’re plugging and unplugging devices. So the device number (i.e. the 3 in the example above) won’t always correspond to the MacBook Pro Speakers. In a gig situation it’s always safer to use --device-name to be sure that you’re using the correct audio device.

VCRUNTIME140_1.dll was not found

Windows users: if you ever see the error message VCRUNTIME140_1.dll was not found, then you’ll need to download the x64 vc_redist.x64.exe—make sure you get it from the official Windows website, because there are lots of sketchy places on the web which will try and get you to download theirs, and who knows what they’ve done with it?

File cannot be opened because developer cannot be verified

Since OSX 10.15 Catalina, Apple enforces stricter security rules which may result in some files in the Extempore download not being allowed to run. When you start extempore, depending on which libraries are being used, you may see a warning dialog box rather like this:

The named file in this example is extempore/libs/platform-shlibs/libportmidi.dylib. Other files known to have caused trouble include libkiss_fft.dylib and libsndfile.dylib.

Software loaded onto the newer versions of macOS which have not come from App Store and have not been properly “notarized” will not run without some user intervention.

There are two ways to solve this issue—a safer way and a less safe way.

The safer way is to open the file in a text editor, and on the way you will get the opportunity to override the security protection. Search for and navigate to the file in question. When you find it, it’s no good just double-clicking the file because you will just get the same security block and the same options. ctrl-click (or right-click) on the file in Finder, choose “Open With” and choose “Other”, as shown in this screenshot: 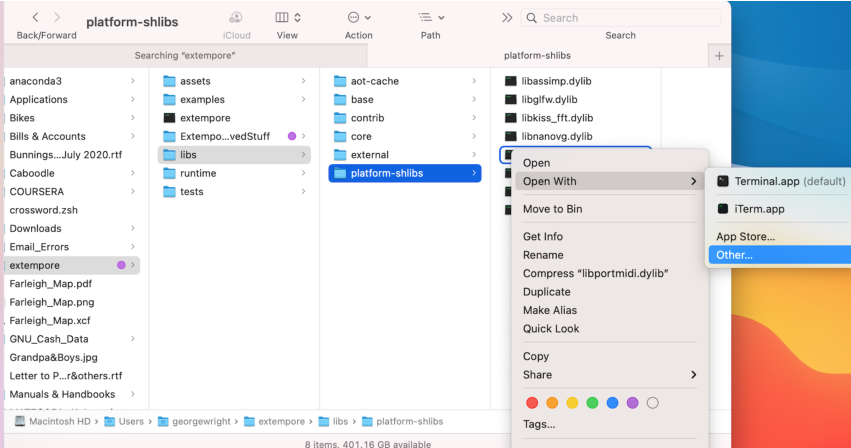 It doesn’t matter which program you choose (e.g. TextEdit is fine), because you don’t actually want to edit it, just open it. After this, the warning will be more explicit and you can choose “Open”: 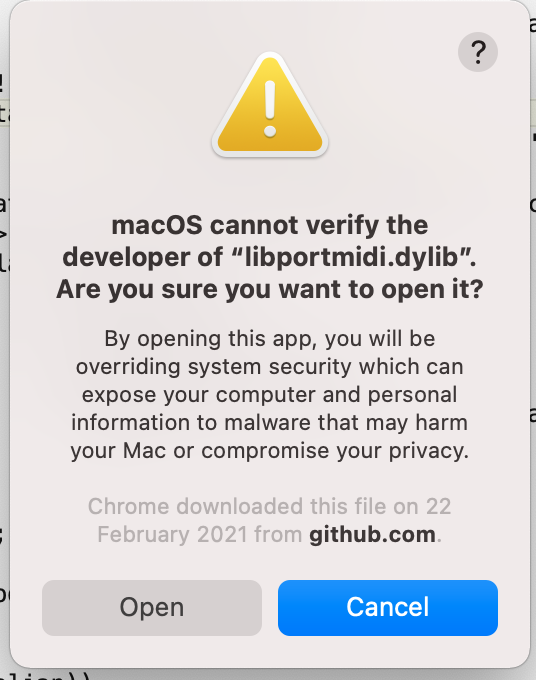 Once you have opened it you have bypassed the macOS built-in protection so you can close the file immediately and go back to using the file in Extempore.

There may be another way of doing this “safer” method: after attempting to run extempore, look at the Security & Privacy General section of System Preferences and you may find a note that the offending file has been blocked, with an “Open Anyway” button provided.

The less safe way is to temporarily disable the System Integrity Protection (SIP). This seems pretty drastic and there are plenty of warnings from Apple. The idea is to restart the computer in recovery mode and run the disabling code in Terminal.app. Then, after running the blocked Extempore code, restart in recovery and run another command in the terminal. You can check the current status of SIP on your computer by running the following in Terminal: